The fifth ‘Paul Mijksenaar Design for Function Award’ has been awarded to Noordhoff Atlas productions for De Bosatlas – the entire series – including the original atlas by Pieter Roelf Bos.

The award will be handed out and registered on Thursday 12 November in Amsterdam, with a small audience. The registration, with a contribution by Dutch writer and cabaret artist Kees van Kooten, will be posted on our website within a week.

‘Crisp’: readable and clear
Since the first edition in 1877, De Bosatlas has become an educational icon with a design that contains nothing superfluous.

From the very first edition, the graphic design of De Bosatlas focused on the readability and clarity of the maps it contained, and this has remained the guiding principle for the mapmakers of the atlas. Cartographer Ferjan Ormeling describes this modernistic characteristic as ‘crisp’, which, since 1981, has mainly resulted in the growing number of thematic maps.

Satisfactory restraint
Constant improvement has always been the premise of the creators; they listened carefully to the young users and their teachers. New insights led to additions to the atlas, for example the thematic maps. These maps form the hidden background of the visible world and thus the backbone of the current atlas.

The demand for usability has led to spectacular maps sometimes being sacrificed in terms of color and relief. After 55 Bosatlas editions, however, a certain calm and restraint have proven to be more satisfactory, as is the case for the interior design of one’s own home.

Chairman of the jury Paul Mijksenaar

In addition to all of the successive editors and map designers of De Bosatlas, the award goes to publisher Noordhoff Atlas productions, which has lasted so long.

About the Award
The Paul Mijksenaar Design for Function Award is intended as recognition for often anonymous designs in which usability is paramount. Previous winners of the award included IKEA’s assembly instructions and the Amsterdam ‘Puccini method’.

This jubilee edition is made possible by a contribution from the Pictoright Fonds. 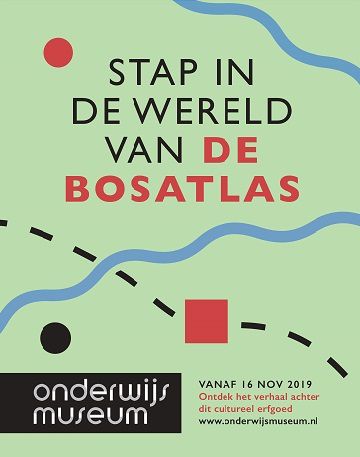